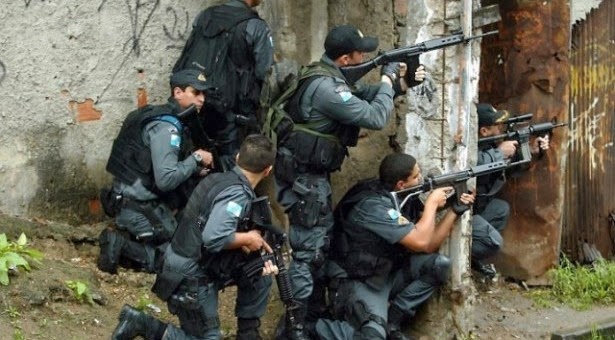 This is my first text for this blog and I thought it would be a good opportunity to share with you my PhD project and its most recent developments in order to collect opinions, comments, ideas. The aim of my research project is to describe and evaluate the convergences between the demands of Latin American police forces in terms of training and institutional development, and the programs practiced by official agencies of international cooperation in the Americas.

The main working hypothesis is that the programs proposed and developed by these agencies in the area of public safety for Latin American countries do not contemplate law enforcement agencies and exclude the local police institutions – exactly the ones responsible for the prevention and suppression of crime – in its formulation. Their agenda is based on the construction of resilient communities and the combat to the risk factors of crime and violence, but police reform is not part of this agenda – as if it were possible to build safe and healthy communities with sick police institutions.

Despite the fact that there are very few studies that have examined the role and performance of these agencies in the specific field of public safety, the few existing ones point to a tendency to generalize solutions to Latin American countries, imposing an agenda that is not necessarily connected to the local police vindications and / or the existence of a certain resistance of these organizations to deal with issues related directly to police organizations.

This fact draws attention because many studies attribute the insecurity of the continent especially to the unpreparedness of Latin American police, who were not able to adjust to the new criminal (increased transnational organized crime mainly) and political challenges, such as the processes of democratization that occurred in several countries of the Region and, therefore, would be calling for institutional reforms – adjust to the democratic standards of policing and develop skills to cope with urban crime. This means rethinking the means of selection and training of police, the internal and external control of police conduct, the external evaluation of police management, the strengthening of ties with the community, the recast career plans and salaries and the redefinition of police mandates.

The study states that the provision of programs (qualification, institutional development and technology) by these agencies has low correlation with the demands voiced by the law enforcement institutions of the continent. Public safety representatives of Latin American countries have been discussing their demands in the last 7 years in the MISPAs – Meeting of Ministers of Public Security of the Americas, an initiative of the Executive Secretariat of the Organization of American States (OAS) – and they have agreed an agenda to accomplish. This agenda will be compared with the programs implemented by organizations for international cooperation, represented by the countries in the DAC (Development Assistance Committee) of the OECD (Organization for Economic Cooperation and Development).

For a recent paper I presented in ISA – International Studies Association 2015, in New Orleans, I analyzed citizen security USAID programs in three Latin American countries (Guatemala, El Salvador and Mexico). It was interesting to notice that only one of them (Guatemala) mentioned “police” in its texts, listing community-based policing as one of their expected results. The others pointed to the enhancement of social participation and the strengthening of civil society organizations.

Every specialist on public safety in the world knows that enhancing social participation and strengthening local-based civil society organizations are part of the recipe to face and reduce crime and violence. However, the apparent consensus on the prioritization of building resilient societies neglects the need to think on institutional mechanisms to improve possibilities of cooperation for police reform in Latin America and the importance of putting law enforcement in the center of the expected changes.

[*] The author is a Ph.D candidate in International Relations at USP. E-mail for contact: anamaura@usp.br; anamaura@gmail.com.